CREATION FREQUENCY, THE. Tune In To The Power Of The Universe To Manifest The Life Of Your Dreams 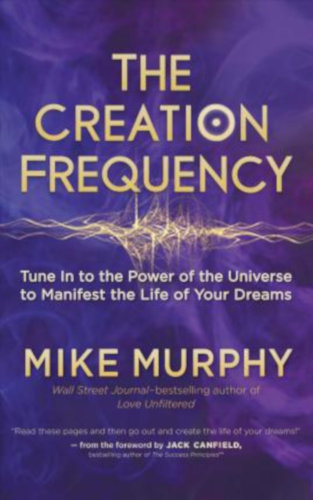 MURPHY (MICHAEL) & CANFIELD (JACK) CREATION FREQUENCY, THE. TUNE IN TO THE POWER OF THE UNIVERSE TO MANIFEST THE LIFE OF YOUR DREAMS  In his mid-twenties, Mike Murphy found his life unraveling as he struggled with alcoholism, poverty, and a failed marriage. By chance, a sympathetic friend referred Murphy to the “mystery man,” a self-help guru who met with him over a seven-week period and gave him the tools that rebuilt his shattered confidence. Under his mentor’s guidance, he discovered the secret of creating and manifesting what we truly want in life. Once he fully understood the concept, Murphy got sober, rekindled his marriage, and embarked upon a career as a successful entrepreneur and philanthropist. In The Creation Frequency, Mike Murphy shares with us the exact same course that his mentor led him through — a profound yet easily understood seven-week guide to the Law of Attraction, with an emphasis on practical techniques such as visualization, affirmations, journaling, and realistic goal-setting. At the end of the course, readers will learn a final secret that both completes and transcends the Law of Attraction, pointing the way toward a life of greater purpose and fulfillment.  NEW WORLD LIBRARY.