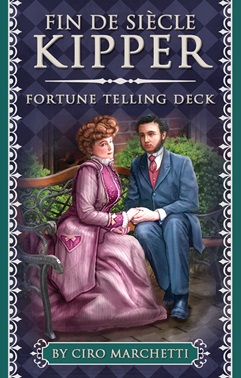 Ciro Marchetti has situated the traditional German fortune telling deck at the turn of the 19th century in Victorian England. In this expanded gilt deck with three additional cards, rich images tell the stories of the  workers as well as the wealthy during the Industrial Revolution. Using augmented reality, via the Aurasma application, Ciro has brought the Fin de Siecle cards to life in stunning, new ways. Guidebook with interpretations by three expert contributors. The Kipper is a set of German divination cards illustrated in Victorian style by veteran tarot artist, Ciro Marchetti. A Kipper deck is similar to Lenormand, but focuses more on people than events in its cards. This set has 39 cards: the 36 standard for a Kipper deck, plus three new additions unique to this deck.