NEW PSYCHEDELIC REVOLUTION, THE. THE GENESIS OF THE VISIONARY AGE 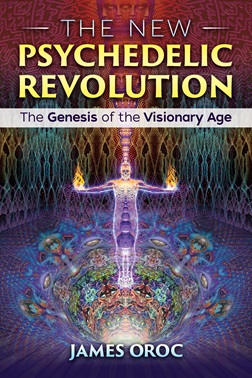 OROC (JAMES) NEW PSYCHEDELIC REVOLUTION, THE. THE GENESIS OF THE VISIONARY AGE

After the deaths of Jerry Garcia, Timothy Leary, and Ken Kesey, it appeared that the psychedelic revolution of the 1960s had finally been suppressed. But the opposite was occurring, evident in the popularity of transformational festivals like Burning Man and BOOM!, the media coverage of ayahuasca use, and the growing number of celebrities and Silicon Valley billionaires readily admitting the benefits of their personal use of entheogens. Along with the return of university research, the revival of psychedelic philosophy, and the increasing popularity of Visionary Art, these changes signify a widespread psychedelic cultural revolution much more integrated into the mainstream than the counter-culture uprising of the 1960s. Speaking from the forefront of this new revolution, James Oroc explores 21st-century psychedelic culture through three of its main post-1960s architects: chemist Alexander “Sasha” Shulgin, mycologist-philosopher Terence McKenna, and visionary artist Alex Grey. Examining their work in depth, he also explores the work of DMT researcher Rick Strassman, MAPS founder Rick Doblin, consciousness researcher Stanislav Grof, author Daniel Pinchbeck, and new visionary artists such as Amanda Sage and Android Jones. He investigates the use of microdosing in extreme sports, the transformed understanding of spirituality that arises from the psy-trance festival experience, and the relationship between the ego, entheogens, and toxicity. He presents a “History of Visionary Art” from its roots in prehistory and antiquity, to Ernst Fuchs and the Vienna School of the Fantastic, to contemporary psychedelic art and its importance to visionary culture. Exploring the practical role of entheogens in our selfish and fast-paced modern world, the author explains how psychedelics are powerful tools to examine the Ego and the Shadow and induce transpersonal experiences. Building on anthropological evidence for the role of plant-entheogens in the development of human culture, he proposes that our ongoing psychedelic revolution is seeding the beginnings of a new Visionary Age