THE TEMPLAR REVELATION. SECRET GUARDIANS OF THE TRUE IDENTITY OF CHRIST 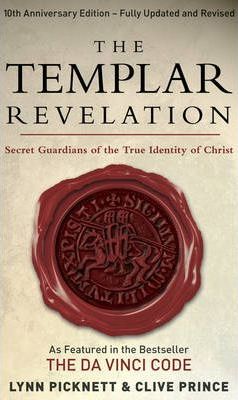 PICKNETT (LYNN)) & PRINCE (CLIVE) TEMPLAR REVELATION, THE. SECRET GUARDIANS OF THE TRUE IDENTITY OF CHRIST.   In the course of their investigations into Leonardo da Vinci and the Turin Shroud, Lynn Picknett and Clive Prince found clues in the work of the great Renaissance artist that pointed to the existence of a secret underground religion. More clues were found in a twentieth-century London church. These were the beginnings of a quest through time and space that led the authors into the mysterious world of secret societies and such bodies as the Freemasons, the Knights Templar and the Cathars and finally back to the ideas and beliefs of the first century AD and a devastating new view of the real character and motives of the founder of Christianity and the roles of John the Baptist and Mary Magdalene. They reveal nothing less than a secret history, preserved through the centuries but encoded in works of art and even in the great Gothic cathedrals, whose revelation could shake the foundations of the Church.